Beer pong may be the most popular party game that was ever invented. It is fun, exciting, and gets your buzz going smoothly. What more could you ask from a game? In every house party, there is a good bet that you will see a group of people huddle around a table enjoying beer pong.

One of the reasons beer pong is so popular is how few pieces of equipment you need to play it. Essentially, you could find all the things you need to play this game in just about any parties. However, if you want the best experience, investing a few bucks towards some dedicated equipment like beer pong cups does not seem like a big dealbreaker.

Things like a dedicated beer pong table or a few beer pong balls can and will help you improve your skills and get better at the game. One more thing that you probably should look into is getting a set of best beer pong cups.

If you are wondering which one to get, let me start with a suggestion. With the PartyPongTables.com Reusable HEXCUP Beer Pong Party Cup, you will be able to set up the table quickly and enjoy the game at its finest. You will read more about it in the later parts of this article. 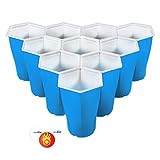 So let’s not keep you waiting. In this article, we will take a look at the best beer pong cups that you can buy today.

Is there really much to think about when buying a set of cups for beer pong? It turns out there is.

Here are our top picks for the best beer pong cups you can find on the market.

Hex cups are always a nice thing to have in a beer pong game or any other drinking game. These beer pong cups take almost no time to set up, and since there is no space in between the cups, the games are usually shorter and more exciting. This unit brings all the excellent features of hex cups and so much more.

You get a total of 22 beer pong cups in the package, along with three beer pong balls. The idea is to use 20 cups for the game while the other two serve as wash cups. Of the three balls, two are standard white-colored balls, and the other one is red for the “on fire” rule. 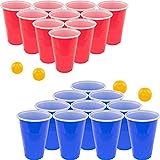 Our second selection is a set of cups for beer pong by the brand Fairly Odd Novelties. You get a total of 22 beer pong cups split into 11 cups with blue color, and 11 with red, to divide between the two teams. You also get a total of four balls to get you started on your game.

Each of the beer pong cups holds 16 ounces of liquid, which is perfect for the game. Furthermore, the balls are also standard 40 mm in diameter, and quite well balanced. With this bundle, you basically get everything you need to start playing with your friend.

Next up, we have a unique product made by an aptly named brand, Should We Drink Tonight. This beer pong cup set comes with not only the beer pong cups, but also 8 cup trays to hold the cup steady in the game and two beer pong balls. The cup trays offer you ultimate stability in addition to playing many other party games.

Whether you are playing with 10 beer pong cups a side or six, you can use the trays according to your needs. The cup holders come in two colors, black and white, to indicate the opposing teams. Additionally, the balls and the beer pong cups are of excellent quality that makes your games even more enjoyable. 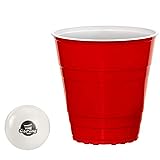 Have you ever wondered how it would be like to play beer pong with big beer pong cups and balls? Well, the people at GoPong sure did, and you can see it in their massive XL sized party cups package. It also contains four pong balls of three inches diameter that goes perfectly well with the beer pong cups.

You get a total of 24 beer pong cups with the package. Each of the cups can hold around 110 ounces of beer. To give you a reference, that is around seven times the standard 16-ounce beer pong cups. So if you want a different experience, this exciting set of party cups might be just up your alley.

Beer pong is one of the perfect drinking games for a wild party. However, if you want to bring a touch of elegance, why not check out this interesting product by a brand called Ideas In Life? Instead of regular beer pong cups, they give you reusable plastic champagne glasses.

The package comes with a set of 12 plastic beer pong cups and six pink pong balls. So if you are planning to play with 10 beer pong cups a side, this might not be for you. However, for those of us who like their games to be short, six cups on each side might be the perfect way to go.

Let’s face it; beer pong is not a very hygienic game. You dunk the ball in beer pong cups, and then your opponent drink from it. In the meantime, the ball may contain many harmful bacteria that could harm your system. But it seems, the good folk at Slip Cup found a way around this problem.

This unique package gives you 20 beer pong cups that actually sit inside your standard plastic cups of beer pong to catch the ball without letting it touch the beer. Don’t worry, since the rims of the beer pong cups are thin; it does not let the ball out when you make a hit. Additionally, it keeps the beer clean and your body healthy.

To finish off our list of products, we bring you this classic beer pong cup kit by Pong Star. Here you can find A Better Way In Home Care Referral Agency. Though it might be a bit more expensive than the rest of the products, there is no doubt about the quality it provides. It comes with 20 beer cups split in two colors, blue and red, to be divided between the two teams.

Other than the beer pong cups, it also comes with four high-quality seamless pong balls. You also get two additional cups to be used as wash buckets and two non-slip mats to arrange the cups. If that was not enough, you also get an instruction manual that contains all the information you need about the game.

By now, you might be thinking, “oh, I could just use the cup I have at home to play this game!” Yes, you could. But you would have a hard time keeping track of which cup is for beer pong and which one is for drinking. The end result would not be very hygienic if you think about it.

You will notice the beer pong cups in our lists also come with beer pong balls in the package. It gives you more value when you want to strictly play beer pong. Since you need a few balls anyway, why not invest in a set of cups and get them for free?

We hope you found our guide on the best beer pong cups informative and helpful in making your decision.