Strings can change the game. When it comes to choosing the best racquetball string, it literally comes down to your personal preference.

Depending on your playing style, you can either go for more power or more control. That being said, you can also try out what others are playing with. That way you can find out which one will suit you the most.

If you want to take your game up a notch, I’ll suggest you spend a few minutes and read the rest of this article.

This is the only guide you’ll probably ever need for your next string upgrade. If you want to avoid all the technical details, just get the best-selling one.

Before I actually get to the reviews, there are some basic equations that you need to know. In general, more tension means more power.

However, a lot of new studies indicated that lower tension means more power on impact. Racquetball balls aren’t like tennis balls. So that rule won’t apply here because of the nature of racquetballs.

In racquetball, the ball tends to compress in an instant. While a lot of pros do tend to opt for lower tension because they prefer power over control. But, for new guys who just started playing won’t actually feel the difference.

Here are my top 3 picks for the best racquetball strings on the market. 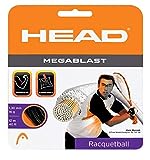 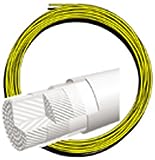 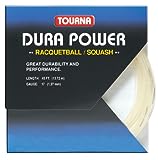 Things To Know About Your Racquetball Strings

They say strings are the soul of any racquet. Well, it literally is. Strings can have a huge impact on your gameplay. That’s why it’s important that you know the basics beforehand.

You’ll notice that there are numbers (16,17,18) indicated at the end of each string. It determines the gauge. Most common string gauge is 17. It’s on the safe side.

If you already broke your string, you should probably go for the 16-gauge string. If you are not sure, go for the 17-gauge string because it’s right in the middle of durability and power.

There are basically two types of strings. One is the multifilament string which is made up of a lot of small filaments put together.

And, the other one is the monofilament. It tends to be stiffer, harder with less feel of the ball.
In most cases, I’d say 95% of the racquetball players choose multifilament strings because of the playability.

This string is soft and comfortable. It’s also the most commonly used string in the game. A lot of microfibers are twisted together to make this string. Which kind of looks a lot similar to natural gut.

These types of strings are more comfortable than solid core strings due to the fact that these are made using hundreds or even thousands of microfibers.

The only downside would be fray. Multifilament strings fray even at normal use. You might be in for a shock if you recently switched from solid core to multifilament core.

Some of the popular Multifilament Racquetball Strings (No Wrap) are:

Solid core with one outer wrap

Most of the “Synthetic Gut” strings are solid core. It’s also the most popular nylon string construction with the benefit of tension maintenance and crisp feel. Size, nylon center core, and outer wraps can influence your feel and comfort.

Same as before with the additional cushioning and feel over the traditional core strings.

If you are more of a control guy and care more about ball placement, the lower string tension will likely be more suitable for you. More experienced players like higher tension in their strings for power.

Longer strings will generate more power. It’s also the same case with less dense strings. You are more likely to prefer control and accuracy over sheer power. Most professional players like to do so.

Tighter and harder strings will vibrate more than softer strings. You can really feel the difference when you maneuver the racquet. For beginners, consider playing for a while to determine the amount of vibration you need in your racket.

Elastic strings are for power users. Rather than absorbing the energy of the ball, it sends the ball flying off at a higher speed. Elastic strings can provide the energy needed for capture and rebound without making the ball bounce weakly off the racket.

I get so much question about what string tension is the best, which racquetball strings do I use, how I string them etc.

Who do I go to string or do I use my own machine to do so and stuff like that. Instead of replying to them one by one I’ve decided to make this entire section dedicated to answering these questions.

For example: If you choose to go with the Ashaway Ultrakill @30lbs, it will work best on all E-Force racquets. I prefer Superkill over the Ultrakill because of the stiffness.

Ultrakill is more playable than the Superkill.

If you want perfection and durability, go for the Head Megablast Racquetball Strings. This is the best head strings from their line-up.

1. Why do you need to change strings once in a while?

Even the best string will lose their resiliency over time. Just like any other racquetball equipment, when you play with them for a while, they’ll eventually go dead.

And, old strings won’t absorb vibration like they used to which will most likely affect your performance.

Strings are also considered as the soul of your racquet. The right string can drastically improve how you feel the racquet while making power shots.

Even power shots will take up more of your energy than they used to. It’s also one of the quickest ways to get injured. Dead strings can be the reason for your injury in your elbow, wrists or shoulders.

2. How often should you change strings?

The most common question among most racquetball players is how often they need to change their strings.

The answer is different for everyone.

Don’t wait for your strings to become completely dead. Change them as soon as you start to feel some strain in your arms.

Other signs are when you feel you aren’t making those power shots like you used to make, or you need to put more pressure on making shots, etc.

Restringing can also save you money in the long run. How?

Restring your racquet with appropriate strings to suit your playing style. Even if you make a mistake in choosing your racket, you can still improve it. At first, you won’t feel the difference. But over time as you gain more and more experience, that difference in the string can mean a lot.

To be able to send the ball back at the opponent at the same speed, to make some whooping smash you would need a set of strings that has a perfect combination of power, control, and durability.

Leave this up to the technicians. Different patterns, racquet frame and all that stuff that most of us don’t really get are best left for the pros. The main focus here is to keep the original shape of the racquet frame.

4. Why is Racquetball String Different From Tennis String?

By looking at them, you won’t really see any noticeable difference. Racquetball & Tennis are very different sports with different equipment needs. However, there are also some similarities too. Even the strings are the same, or is it?

Most of the core differences are in the construction. An average consumer won’t give a shit to them. Neither will I. It’s better I take the words of the pros for it.

From a player’s standpoint, there is a difference in the feel, power, and control. Tennis racket and racquetball racket don’t have the same frame construction, and thus they both require a specific type of string for them.

Racquetball game is more “pop”! Quick shots here and there, sudden power shots fast paced. There is a different feel to it.

There is also a tension difference between tennis string and racquetball string. Textile engineers have been able to make racquetball string perform optimally at 20 to 55 lbs. of tension. Where the 45-75 lb. Range works best in tennis.

Sweet spots are also different for both types of rackets. On a racquetball frame, the sweet spot is usually very close to the head. That’s because players are constantly diving and grabbing shots right next to the wall.

On the other hand, Tennis strings are highly resistant to “notching.” Because of spin shots, long volleys, and cross shots. There are also environmental differences. One is played outdoor and the other indoor. Different ball material.

Let’s put all the technical details aside and think for a moment. What’s truly important for selecting a racquetball string?

It’s how you feel that’s truly important. Not these technical mumbo jumbos. Your strings should give you the pop off the racquet face. Most of the time you would want to overpower your opponent.

Speaking of “feel”, why not check out my pick for the best racquetball gloves, click on the link to see what’s trending.

That’s how racquetball is. Because power rules in this game, the strings are normally strung loose. Now, which one of them would be the best racquetball string?

I guess that depends on you. How you want to play will determine which racquetball string will be the best for you.